A couple of posts ago I showed you the plant that I am going to paint from my time in Menindee. It is Senna artemisioides subspecies filifolia. While I haven’t begun to paint it yet, I thought I would show you a little more of the preparation process, and some of the information I needed to collect before I came home.

This is the specimen I am painting 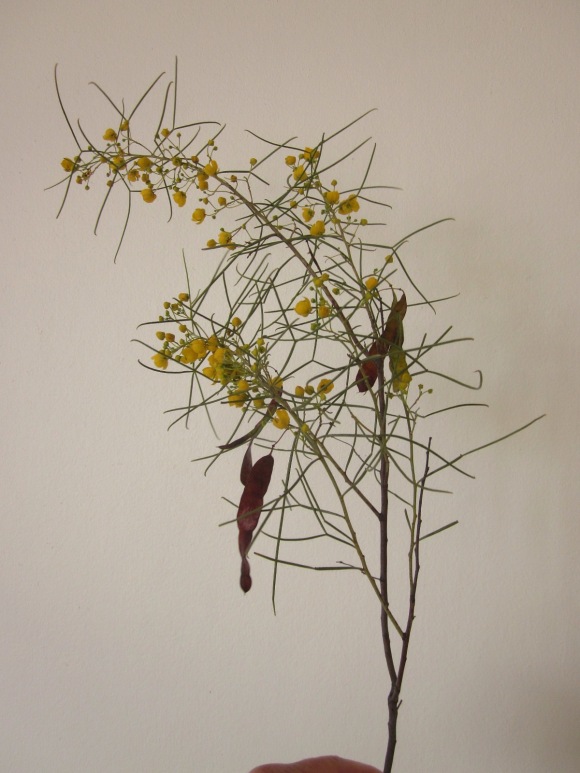 and this is the finished drawing, done on tracing paper.

A close up of the drawing. (Yes, I am also wondering how I am going to paint it!)

As we collect specimens for the Herbarium we have to have very detailed notes about the environment of the plant. That information is recorded on a label that accompanies the plant to the Herbarium. You can see that precise information is needed. Beckler’s original collecting notes were often quite vague, with locality being something general like Lake Pamamaroo. Smart phones and GPS means that we can pin point our position.

This senna has the most wonderful seed pods. The mature ones are rich mahogany and twist and curl as they open to spill their seeds. I am going to add a row of them below the plant.

A key aspect of the plant is, of course, colour. It was important that I worked out the right colour (and recorded the mix!) before the colours of the plant faded.  Sometime I am confident that I have nailed the colour only to find when I start painting that it isn’t right. These look pretty good now, so fingers crossed. 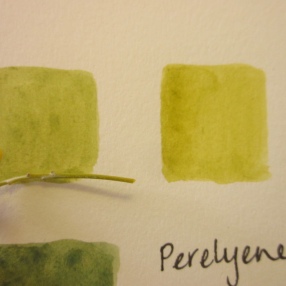 So, I have all the information I need to start the painting. All I have to do is clear off my very messy table and finish off a few other works in progress………

There were ten artists at Menindee this year, and we were able to find nine plants from Beckler’s list. (Not sure what I am talking about? Have a look in the category Beckler’s Botanical Bounty on the side bar. Sorry, but putting in links is a little too tricky on the iPad.) Fortunately one artist was happy to redo a plant that she painted a few years ago as this year’s specimen was much greener than the dried one she did originally.

Finding nine plants is pretty good, as we are close to the end of the list. As well, we were without the botanist who has been invaluable in past years. Added to that, the season had been so wet and cold.

My plant is Senna artemisioides subspecies filifolia. I wasn’t sure what subspecies meant, but found this information handy. It comes from Philip Moore’s “A guide to plants of Inland Australia”

Some of the common Australian cassias [sennas] occur in large and very variable integrating populations called hybrid swarms which are maintained by asexual as well as sexual reproduction. Because of their complexity, they cannot be satisfactorily separated into species. Recent revisions have ….. reduced a number of variants which were formally regarded as distinct species to subspecies of two widespread species…

Sennas are very common through arid areas, and indeed when I see them in the Mallee country up the Calder Hwy I know that I am starting to get away from the everyday. They are a small bush with bright yellow flowers, like a buttercup. The flowers cover the bush, so they seem to be a moving mass of yellow beside the road. 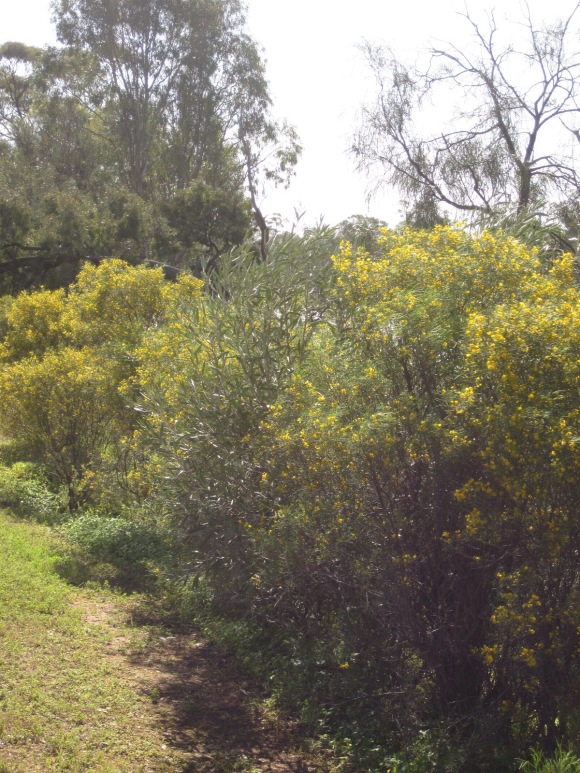 Identifying my senna was a little tricky. The key identifying feature is that the petiole and pinnae are terete. The first step is to work out what that precise botanical language is saying in words I can understand! Terete is sort of like a cylinder, the petiole is the part that joins the leaf to the stem and the pinnae are like little leaves. The photo below is of the other subspecies, the one I am not painting. Can you see the flat parts of the leaves? That tells me it is not mine.

This photo is of mine

Not a lot of difference!

Once I had identified it, I collected some pressings to add to the collection for the herbarium. As well I took cuttings of the parts I wanted to paint. Then it was back to the hall in Menindee to begin my drawing. I have mentioned before that I dew onto tracing paper rather than the good watercolour paper. You always make mistakes, and rubbing ruins the surface of the good paper. After I have finished the drawing on the tracing paper I transfer it to the good.

It was a very complicated drawing, and took me two days to finish. Quite a few of the pinnae come forward and have to be drawn in a foreshortened way. They were hard! But I think I have captured it well. The plant seems to dance, and I want to make sure that comes through in the painting. I am hoping the fine leaves will make the painting easier! The photo below is of the drawing in progress. The photo above shows the whole specimen.