The tour is the result of an anomaly, that someone can own a parcel of land, or have pastoral leases, but not own what is under that land. In the late 60s and early 70s companies created exploration tracks around Arkaroola to investigate what minerals might lie beneath the earth. One company was Exoil and they gave permission for Reg and Griselda Spriggs to use their tracks. One of those tracks became the Ridge Top Tour.

The track winds its way through the remote area north of Arkaroola village. At one point the tour stops to let you look back on the village, to see the last bit of the human world that you will see for a while. 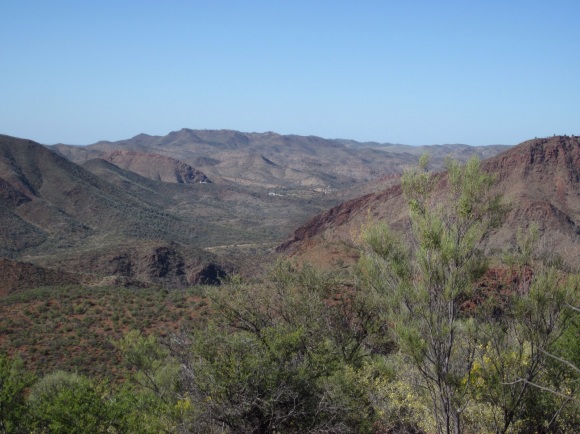 And to look around at the non-human world

And it was that environment that I loved.
The 4 wheel drive track was exhilarating — steep climbs, hairy corners to turn, steep slopes that the vehicle had to ‘walk’ gently down. But I really loved the remoteness, the grandeur of the mountains, the way the plant habitats changed around each corner.

The destination of the tour was Stillers Lookout. And it was truly spectacular.
br />

In her autobiography, “Dune is a four letter word”, Griselda Sprigg tells how her family, Reg, her 2 young adult children and herself, were following one of Exoil’s tracks. It stopped at the base of what is now the lookout. Reg bushbashed up the slope, almost rolling the Jeep, to find the most incredible view that Griselda describes as

For a long time we were speechless. From the north-west all the way around to the south-east we could see the horizon: drought-crazed flood-outs meandering across parched plains towards Lake Frome, the glittering white expanse of the lake itself, desiccated red-brown station lands stretching away to a pitiless infinity. Behind us were the contorted ramparts of the Northern Flinders Ranges, ancient and mysterious and seething with brilliant colours.

And it is breathtaking. That’s Lake Frome you can see right on the horizon. It is one of the salt lakes that ring the northern Flinders Ranges.

It is also where you get morning tea. 🙂
The other thing that made the trip for me was the knowledge of the guides who took us. All the way Rick, our driver, was able to tell us about the rich history of the area, from way back in geological time to indigenous history to white settlement and exploration. He knew about rocks and plants and animals. And all the way he drove with such ease and confidence.

This last photo is a little reminder that this is a harsh and unforgiving environment, and that things can go wrong for even the best prepared. You may be able to see the vehicle as a white speck in the photo. It was taking a tour when the gear box went. The people on the tour were fine and never in danger, but the vehicle had sat out there for a while until it could be towed into to Arkaroola Village for repairs.

9 replies on “The Ridge Top Tour at Arkaroola”

Spectacular is a good word to describe it! Not for the faint hearted though 🙂

And there is something about it that gets to you. It is unforgiving but rugged and, as you say, beautiful.

I would love to experience that view and be speechless. We’ll be taking the The Ridge Top Tour at Arkaroola 🙂

EllaDee, hold tight to your dream and your plan, because you will get there. You will wander through the Flinders Ranges and marvel at them. And you will send back blogs that make me jealous!

… and take you back in memories send spirit 🙂

Most definitely! I will be with you in spirit 🙂

[…] Fella and I have caravanning adventures around these trips, to the Flinders Ranges, the Coorong and places along the Murray […]